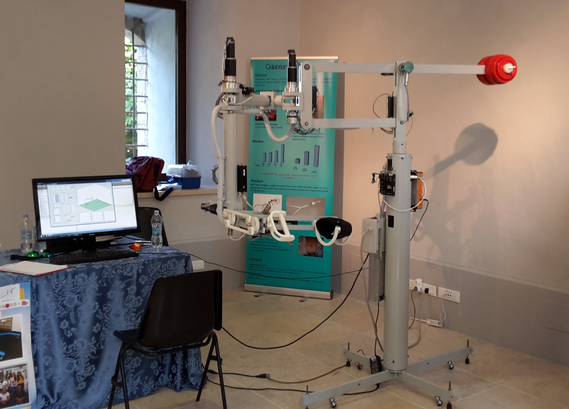 It’s a new rehabilitation robots for upper and lower limbs, right and left, capable of active and passive rehabilitation, which, even not being an exoskeleton, behaves as if it were, but without requiring mechanical adjustments.

The system, in passive mode, measures the movement and translates it into the angles of flexion-extension of abduction adduction, or pronation-supination, having previously determined shoulder and elbow position of the rehabilitator limb in its reference system.

Sitting then the patient and repeating the calibration phase, the system, which now perfectly knows also the patient geometry, calculates the path to be performed for the patient to repeat exactly the movement required by the rehabilitator but adapted to the different patient kinematics, being then able to repeat it endlessly.

The system will be able to measure the forces exerted by the patient, so if the same were to produce a spastic contraction, it stops, then reversing the movement .

Beyond that a button, to be taken in the other hand, will also be given to the patient is, the pressing of which will completely eliminate the power of the robotic arm.

Obviously the system will record all the data, so as to allow the evaluation of the patient’s progress.

Since the system incorporates a force detection device, it will be possible also a rehabilitation mode in which the system will be locked, moving only if the patient exerts a force greater than a certain predetermined level by the rehabilitator, and in the direction of the force.

Regarding the calibration, we begin to say that the limb diaphyseal axis connected to the machine for the robot coincides with its last member.

Therefore, in the calibration phase, resting his elbow on a surface (the same back of the chair which will be wider than usual), and moving the forearm, the position of the point around which the forearm, ie the elbow, rotates will be detected, becoming a point of known position to the robot.

Then moving around the patient’s arm fixed to the chair, the system will calculate the position of the center of the sphere described by the movement of the elbow, which will coincide with the shoulder position in the robot coordinate system. This to explain the ease of exercises programming.

Finally, even videogame will be mounted, so as to allow a rehabilitation perhaps less precise, but much more pleasant.