While it may seem that the ROSES project is at a standstill because no further posts have been published, the explanation is simple, we were too busy working on it. Meanwhile, there is great news, the Italian patent on the force measurement system has been recognized, which is extremely innovative compared to what is presented by other systems. And the related European patent is also being granted, since all the observations made by the examiner have been validly refuted. But above all there are a number of big news in the system. First of all, the new Slave was developed with a 36 mm diameter sterile passage hole (let’s take back this denomination, which we had abandoned to join the ridiculous iconoclastic campaign of politically correct that resulted in the demolition of some statues of Christopher Columbus). This new Slave was created to allow the passage of hemostasis valves, which is necessary in certain operations, and was also used in the development of ROSINA. At the same time, the new disposable for large catheters was developed and tested, from which both the new disposable for guides, without movable core or with this, of the two types, completely movable and fixed at the tip, are derived. Also the new disposable for angioplasty was created, which eliminates two small defects found in the previous model (which, moreover, has been tested several times on the patient by Prof. Indolfi and his group), and also incorporates a rotating hemostasis valve. On these new products a new patent was recently presented, and the relative image is here presented.

Another very important novelty, we have developed the Double Slave, which contains five motors and, thanks to the simultaneous presence of two perfectly aligned internal gear trains, allows two rotations and three independent advances on the same equipment. The initial idea of this development (already presented as PCT) was mainly aimed at the development of a catheter with variable tip curvature, but it could also be used for other purposes. For example, it will allow the guide to introduce the initial catheter or other catheters of a particular shape, being able to move it forward and turn at will while from behind, always at a distance, the guide with a free mobile core is maneuvered, which allows to straighten the catheter in the phase introductory, and then leave the curvature free when reaching the target. To better understand how everything works, let’s see the new image of the system which includes the Double Slave placed on the handling trolley, which also measures the opposing forces from the body to the advancement of the catheters. As you can see it is quite simple: on a stainless box (gray) held in position by a lateral arm that can be placed on a tripod or hooked sideways to the bed, while the distal end, which contains the force meter rests on a tripod and is held at the right height to keep the box tilted towards the patient. On the box a single rail (green) on which in this case three small slides are placed, of which the first holds the proximal Slave with only two degrees of freedom (and we will see why it is used), but easily replaceable with a three-degree one of freedom, on the second there is the Double Slave which holds the hemostatic valve in front, which can rotate with the catheter, while behind, not visible, there is the disposable for the guide wire with a mobile core. The motor (red) located below is connected to the third slide, connected to a worm screw that moves the Double Slave, distal, with respect to the proximal. It should also be noted that the proximal Slave can have the disposable push inside the same Slave (derives from the development of ROSINA, and takes away only 42 mm of thickness). Of course, once the initial catheter has been correctly positioned, the disposable for the guide can be extracted, and replaced with the one for angioplasty. Since all the listed elements are placed on slides that move on a single rectilinear rail, by connecting the motor to the force meter we obtain the measurement of the g component of what is present on the rail, obviously constant, while any dynamic effects can be calculated and compensated for. But if the body opposes the advancement of the catheter, this causes a decrease in the force acting on the sensor, and this is the force that will be measured and reported on the Master’s display. Note that this same system can also be used for the TAVI (substitution of the Aortic Valve), only the program to use will change, but the system is exactly the same. Then when the tip curvature catheter that can be controlled by the Master (or Console, if you prefer) will be available, the guide with a movable core will no longer be used, but the system remains the same, except in the software, which will use the second degree of control. of the Double Slave. So here is the first image. 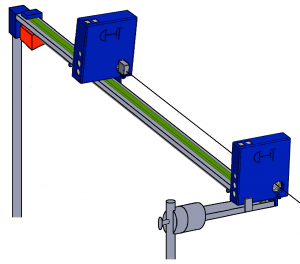 Naturally, if the first catheter is introduced manually, the system for angioplasty may be reduced to this simpler version, shown in the next page, in which the 3 DoF Slave is used alone, but still mounted on a very short rail, the Slave being hooked to the force sensor by a wire. Note also that in this case the hemostasis valve is fixed to the Slave, so no forces are detected till the moment in which guide wire and catheter exit the initial catheter. But really friction between catheters inside the initial catheter have no clinical relevance. 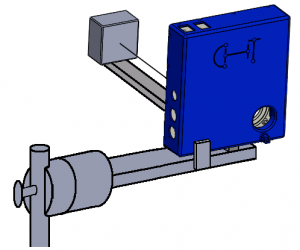 Using instead two step motors placed in parallel hooked to the first slide, three Slaves (of which the second is double), and four slides, the system may be used also for carotid and intracranial surgery, where the guide wire must be always coaxial to the catheter, with the initial catheter being driven by the double Slave. 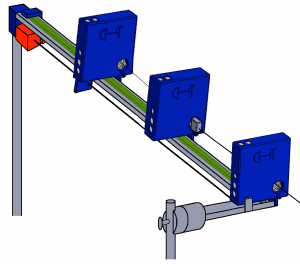 Among the novelties to report, created for angioplasty, but could also be used in other cases, there is also the possibility of measuring the length of a stenosis before deciding the length of the stent to use. This is done by exploiting the fact that, using the step motors, the advances are linked to the number of steps. A software option has therefore been introduced whereby, in order to precisely measure the length of a stenosis, the guide must first be taken beyond the stenosis. This is because to measure it is better that the guide is pulled rather than pushed, since the initial curl of the guide could mislead the evaluation of the position. Once the point of interest has been passed, the guide is recalled until the stenosis begins. At this point, press the image of the measuring roller on the display, which becomes colored. The guide continues to be called up until the other end of the stenosis is reached, the image is pressed again and the measurement (which moved increasing the negative distance, since we were pulling the guide back), which stops. The following images and the table show the results of four measurements on a straight tube on which the beginning and end of the stroke were marked, and four measurements on the curved tube. 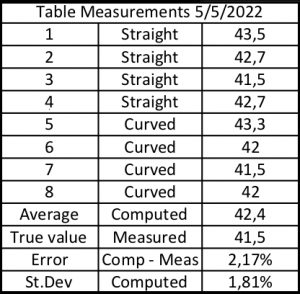 Sequence of images of one of the measures on the straight tube showing, first Column, the gauge with the thread stopped just before the initial mark underneath, the second Column, starting point and screen image, third Column, color change and tube with thread arrived at the end, fourth column final result.

Sequence of images of one of the measures on the straight tube showing, first column, start of measure, second, color change, third, arrival, fourth, measure.

Last, but not least, with double Slave, thanks to the big passage hole, new reusable or disposable tool can be developed for guiding any type of special catheter, including those for ablation, which allows precision positioning the catheter under X ray without the presence of the doctor, hence not requiring the use of NMR, reducing costs and increasing number of possible applications.